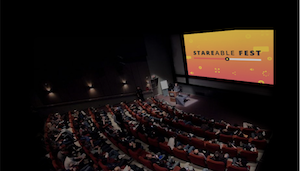 As part of its mission to celebrate the best of web series and indie TV, Stareable Fest wants to honor boundary-pushing creators who are incorporating new media elements unique to digital video content. To better clarify what we have in mind, we've put together this guide. In general, new media elements consist of storytelling elements beyond the linear web series itself that deepen the audience's understanding and connection to the series.

Note: the new media elements must have been made by you or your team, or at least in association with you or your team. For instance, this definition does not include fan art or fanfiction, even if you retroactively consider it canon, nor does this definition count the original work if your series is an adaptation or spin-off of an existing piece of media you were not involved in creating (ie- a classic novel).

If your series has one or more of the following elements, you can link to them in that portion of the submission.

The technique of telling a single story or story experience across multiple platforms and formats using current digital technologies. Wikipedia

If your series has storytelling elements that exist on platforms other than your main video platform that goes beyond simply updating fans about the series, this counts as transmedia. Specific examples include Twitter accounts and blogs for your fictional characters (and written as if they were real people) or websites for fictional schools or publications within your series.

The accounts must add to the story in some meaningful way. A Twitter account that tells behind-the-scenes facts and shares links to new episodes does not count. A Twitter account ‚run by one of the characters and commenting on the events of the episodes as they happen does.

If the story is influenced in some direct way by the viewers of said story, it counts as interactive.

Examples include in-character Q&A vlogs, in-character responses to video comments that are addressed in video or feed into the world building, or allowing the audience to vote on or influence future episodes and character choices.

If your web series requires more than clicking next episode to watch the full story, this counts as non-linear storytelling. Choose-your-own-adventure shows utilizing end screen annotations to give audiences some control over the narrative, mixing up playlists so viewers can watch the series in different orders to gain a new perspective, or incorporating some kind of viewer-solved mystery into finding the next episodes are all examples of this.

If your series has an associated app, board or card game, prequel novel, or any other interactive property based directly on your series that serves to deepen the world-building and story, it counts as a new media element.

If you have any questions, please don't hesitate to email festival@stareable.com.